Posters of such content hang on the boards in Stormwind and nearby towns:

Posters of such content hanged on the boards in New Stormwind:

Unroll the outdated poster:
[You must be registered and logged in to see this link.]

The Ninth Company@Defias Brotherhood is a RP-PvP Guild. We are a social group, focused on roleplay and player versus player combat.

We are looking not only for roleplayers, but also for casual players who would like to fill our ranks.

We offer a friendly company of players who enjoy fair play, without hatred or exaltation, as well as subsidized repairs from the guild bank and other bonuses.

Our Out Of Character goal is to become a solid RBG team on the server.

Our In Character goal is to become one of the most powerful military organisations in the realm, with regard to honourable behaviour and traditions of the Alliance.

What is this all about?

The guild was created with two purpose in mind. One of them was to create an Alliance themed guild that would promote PvP activity among roleplayers. The other reason was to create a military group with a strong bond to the Alliance traditions, knighthood, and nobility.

The guild's mission is to create a company of honourable knights and devoted soldiers to uphold the ideals of the Alliance. The concept oscillates around idea of knighthood and nobility (in wide sense).

What about a uniform?

Due to PvP and RP reasons the guild does have a uniform. There are ranks for recruits and rookie roleplayers who could not afford an armour IC, and also ranks for veteran characters who have obtained their epic armour already.

Where to find us?

For a long time the Ninth was serving in Stormwind Barracks, Old Town. Back in the day Captain Blackstone together with Colonel Heldrik Brookbarrow restructurised the barracks, making it shared by all military units and assigning different buildings to different ranks (enlisted grades, commissioned officers and the leadership).
Currently, as the Stormwind Regiment has been reformed, the Ninth Company resides away from the capital, being stationed in Westbrook.

If you have any question, please contact me at: [You must be registered and logged in to see this link.] or in game. Thank you for attention. 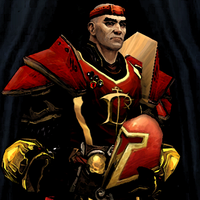 I did not revolutionize anything, except the fact of moving the IC command centre from a building inside the city barracks to a building closer to the streets, as none of them is used by any other guild than the King's Household Cavalry and the 9th Company.

The SI7 building was always used by some intelligence guilds (none active, currently) and by the Stormwind Regiment (moved to AD).

The Command Centre was used formerly by the Blazing Shields Regiment (moved to AD).

The Champion's Hall was used by various groups, who didn't stay long, however.

Sir Zackarus Xaviour wrote:How is that going to work, because people "claiming" ownership of structures does not sit well with me; or have I got the wrong end of the stick?

The city's barracks are a perfect hub for all those guilds that roleplay military units. I think, I don't need to give any particular argument to support this. As I know it's been like this from the very beginning, so, what I'm doing is simply following the common sense.

My purpose and idea for operating in these locations is simple - there are just two guilds now with the same agenda, both of which share the ranking system set by lore, and by assigning different ranks to different places I wish to give each rank their "private" environment (as it works for lightwielders in the Cathedral, civilians anywhere else).
The exception is the Westbrook Garrison (there are just us and another RP guild "Kurcze Skrzydło", but due to their inability/timidity to speak English they do not roleplay in "the mainstream") which was chosen as a HQ due to IC reason (there are no beds for soldiers/officers in Stormwind barracks) and RP reason - we march each week to Westbrook for a guild meeting, passing by Goldshire and on our way back we have a drink in Lion's Pride (needless to say it serves a wonderful RP promotion purpose, and it's weekly!).

Two more things: firstly, few weeks ago I put my request ICly during the Stormwind Council, to be granted responsibility for the city barracks. Community representatives agreed. I do not perceive myself as the owner of those, as buildings belong to the Kingdom, and I'm just an officer with a permission to use them. Secondly, it's open to each other military guild who pledges it allegiance to the King, which is actually a big change since the last organisation for this places.

To conclude, it seems you've got the wrong end of the stick.

With the return of the Ninth Company in Stormwind the posters are once again a common sight in the streets.

Hey. It has not been a long time since Ninth were stationed to Stromgarde, and "banished from the realm" unless they manage to retake Arathi for the Alliance. The Horde sent them fleeing and escorted them eventually to Tyr's Hand.

What did happen since that point?

Don't get me wrong. I do like your guild. I even was a member of it once and you've always been a good fight for the Red Reach.

I just wonder what all exactly have happen to the guild story-wise?

I can't tell due to secrecy concerning the issue. If the others want to share more about it then by all means, but Ninth has had some settling to do with with changes in leadership especially and locations.

Well I hope this clarified a bit, Ninth is going fine, you will hear more of them. Takes a while though until it's over the change phase.